Art as a form of creation

Yesterday, Pat divided us in different groups from the ones of the presentations, so that we would change partners. We discussed in these groups the material we had to bring to the class, asking questions about how it was related to the presentations and why we had chosen it. We could discuss articles, songs, pictures and poems. After doing this activity, Pat gave us papers in which we should write a word, a phrase and an idea which we considered important about this activity and the presentations.

These are the pictures I brought to class: 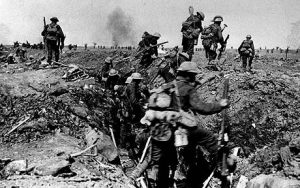 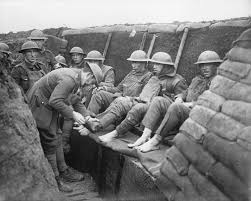 In my opinion, these pictures are very related and connected to two poems we read, the one I presented, “Soldier, Rest” and “Dulce et Decorum est”. Both of these poems, refer to the pain and suffering underwent by soldiers during warfare. The inhuman conditions in which they lived in trenches and the constant risk they has to face are several aspects developed in the poems. Their message it’s to make people understand how harsh and heavy war was for soldiers and the trauma caused by it. In both of these pictures, the awful conditions in which war was fought. The precarious state of trenches together with their bare feet are some examples of their poor living conditions. This is also one of the reasons of why war is so harsh, negative and has to be avoided, and it’s not something to be proud of. This idea is mainly shown in the poem “Dulce et Decorum est”, which emphasizes that dying for your country is not honorable, but “an old lie”.

From my group, an interesting song was brought by Luz, called ¨Brothers in arms¨, by Dire Straits. This song or poem is really attractive and interesting, as it describes the pain and suffering underwent by soldiers during war and how evil is war, which causes many losses. I relate this song to the poem ¨the death bed¨, as in this one death is personified and chooses someone to die, showing that war leads to a constant battle and risk between life and death, and that anyone could be chosen to die during war, as casualties are something common. Moreover, this song is related to the poem, ¨soldier rest¨, by Sir walter scott. I believe this, as both of them show the horrors of war, and how soldiers are traumatised by it, as a consequence of their constant pain felt in warfare.

1 comentario en “Art as a form of creation – Eportfolio”