These are our results to the multiple-choice test in our Biology class. It was a pair work and I worked with Tomás Braun. 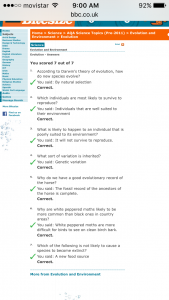 These are the videos that we used to answer the questions.

This is the story which we have to read for Wednesday 22nd. It is called “Message from the Pigman”. This story was written by John Wain.

Message from the pig man from pilarpsegundo

This is the presentation done by another group about Present tenses, summing up it’s structure, formula, key words, uses and examples.

Presentation of the Present Tenses. from TrinidadInesPorretti

This is the story we had to read called “Eleven”. This story was written by Sandra Cisneros.

This is my summary about “Eleven” by Sandra Cisneros including the plan of it.

1) Main ideas:
Main character: Rachel, turning eleven.
Does not feel Eleven. Wishes to be 102.
She says: you are all ages you have been.
Accused of owning ugly/disgusting sweater.
She’s innocent and does not have capacity of defending so she suffers.
Sad and disappointed on her birthday.

2) Introductory sentence:
This story, written by Sandra Cisneros, is about a girl, by the name of Rachel, who is turning Eleven.

3) Main ideas turned into sentences:
The main character is Rachel, a girl who is turning Eleven.
She does not feel like an Eleven year old girl and wishes to be one hundred and two so that she could feel this age.
Rachel explains that once you’re one age you don’t stop being all the previous ages because, for example, you can still cry like a two year old girl.
In school, she is accused of owning an ugly and disgusting sweater.
Due to his innocence and non capacity of defending herself, she has to suffer by wearing it.
This makes her feel sad and disappointed in her birthday.

Summary:
This story, written by Sandra Cisneros, is about a girl, by the name of Rachel, who is turning Eleven. However, she does not feel like an Eleven year old girl, because, for example, she sometimes cries like a baby of two years old. For this reason, she wishes to be a hundred and two year old woman.
In school, Rachel is accused by a bully, named Silvia Saldivar, of owning a repugnant and gruesome sweater. The girl, due to his innocence and non capacity of solving problems and hard situations, suffered the pain and embarrassment of wearing it.
In conclusion, Rachel wished to be older because she was powerless and impotent at the moment of denying and confronting her problem in the math class.

This is my cover for this story. 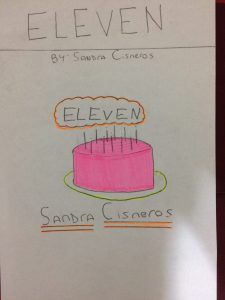 These are my notes about our biology class on Wednesday 15th of March.

Our teacher, Pilar Pando, told our group to make a presentation about past tenses. My group was formed by Valentina Re, Tomás Braun, Anouk De Laferrere and me. This is our presentation:

This is our slieshare about the story “Eleven” by Sandra CIsneros explaining it´s aspects, views and the understanding of it. Our group was formed by Tomás Braun, Alexis Stankiewich, Juan Elía and me.

These are my answers to the topic we will start seeing today in our Biology lesson without reading the chapter.
This is what I know now about variation + Natural selection.

These are some notes of this class: