Pilar, told us that for the first class after the holidays we had to read our Lending Library and make a booktube of it.

This is my booktube about the book “The wreck of the Zanzibar” By Michael Morpurgo: 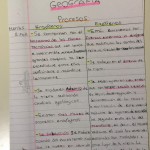 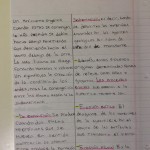 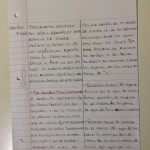 This is the analyzis of Love III that we made on a scrapbook today with Pato:

ESSAY WRITING
Essay Question: “How successful was Wilson in achieving his aims at Versailles?
Explain your answer”.

In the following Essay, I will explain and analyze how successful Wilson Woodrow was on achieving his aims and objectives according to the final terms previously discussed by the big three.

On the one hand, his aims weren’t totally excluded and this is why many of them were achieved. The League of Nations, Wilson’s most important point, was obtained and founded on January 10th of 1920. Moreover, the point number thirteen: “Poland to become an independent state with access to the seas” was accepted, giving them access to a sea port through Danzig. It was not only attained that France would regain Alsace-Lorraine but also he accomplished the disarmament of Germany, although he wanted all countries to disarm so that the “just and lasting peace” could be achieved. In addition, Woodrow, gained his aim of self-determination but not completely. In spite of the fact that Wilson wanted Self-Determination for all the countries, he gained the autonomy of the ethnic groups and the Germany’s colonies. This happened because Britain and France didn’t want to give their colonies, they thought that only losers must suffer the loss of them.

However, on the other hand, he didn’t obtain all his desires. Firstly, the war guilt made his idea of “just and lasting peace” and “not to be very harsh on Germany” be lost. This happened because Georges Clemenceau “was determined not to allow such devastation ever again”, this means, that he couldn’t let Germany invade France ever again and he thought that this was the perfect moment “to weaken them as much as possible”. In addition, his second point wasn’t accepted. As I mentioned before, the disarmament and self-determination was not totally completed because they were established only for Germany to suffer. Moreover, “the strengthen democracy in defeated countries”, was not achieved because the War Guilt and reparations made Germany’s economy fall. Finally, the third point of Wilson’s fourteen points, was either not obtained.

All in all, Woodrow’s aims weren’t accomplished completely, however, he managed to convince Ll. George and Clemenceau about almost half of them.

Today, in our History class, we started making infographics for each of the treaties, apart from the Treaty of Versailles, that were made after the end of WW1.

These are my infographics with the tool “easel.ly”: