Bloated: Something that is inflated.

Choke: To suffocate someone.

Stirred: To disturb or be active.

Sizzling: Something that is baking or burning.

Shrieks: To shout or yell.

In the first page of this story the weather was not cool, it was a very sunny day and you could feel the air of the place. The next afternoon It was too hot and to bright. It was an arid time of day and the air was sizzling.

This is the Scrapbook we made with Pato in the class about the first page of Games at Twilight.

After finishing the reading of the story, we made this Scrapbook in which we analyze Games at Twilight written by Anita Desai:

Analysis of Games at Twilight from Anouk2002

Page 22 and 23 of booklet. Activities by Rama, Álvaro and I.

Some themes and Issues for this story are:

Ex 1- She expresses the atmosphere of the story with adjectives which symbolize death. The author wants to show us how suffocating the weather was for them.

-Mira: Our impressions about Mira are, first that she was the most mature girl of the group. Secondly, she solved all the problems between them and also she always organized the games for them. She did all this acts because of her motherly attitudes.

Raghu: Our impression about Raghu is that he was the oldest of the kids. Raghu was admired by all the children, but Ravi was the one who admired him the most because of his footballer legs. Finally, he was the bully of the group because he hit the younger ones.

Ex 3- RAVI FINDS A HIDING PLACE IN THE SHED

A-  Ravi, when he entered to the Shed, he felt scared, incomfortable and very nervous because Raghu was near him.

C- Ravi´s feeling about managing to escape from Raghu was victorious. Ones he entered to the shed he realized that Raghu was a company and protection

RAVI SPENDS TIME IN THE SHED

A- His feeling were ugly, disgusting, horrifying, creepy and shocking because of the rats, spiders and insects which were in the shed and he could not see because of the darkness of the place.

B- While Ravi was daydreaming of his future won, the kids outside the shed were having fun and enjoying while they played another game.

C- Ravi´s thoughts about his “victory” against Raghu were self-congratulating because he would win to the eldest and the one he admire the most so, for him, this would be an incredible and amazing action.

A-  When twilight was approaching, he felt abandoned, ignored, miserable and insignificant. At this time of the story he realized that something was wrong.

B- Ravi felt dissapointed and realized he had been forgotten and he was insignificant for the others because they had started playing another game.

C- Firstly, they didn’t recognize him but after a minute they remembered who he was and they told him not to be crybaby and to join them to play another game.

D- They were chanting and making an arc with their arms. This affected him in the way that he thought he was going to be win and be the hero, however, he realized that nobody cared about him and he was not important for them.

RAVI FEELS A SENSE OF DESPAIR

A- He has learned that growing is painful and that he wasn’t so important for everyone. Also he has learned that life has good things and bad things, ups and downs. He realized that this was a part of the cycle of life.

B- The ending of the story represents a complete reversal for Ravi and his hopes because when he was in the shed he imagined that he was going to win and to be a hero but, at the end, when he realized that they were playing another game and they had forgotten him he felt dissapointed, with no hopes and insignificant.

A- This quotation expresses that there was no activity, no life, no movement and this is refering that nobody was alive because of the weather and environment.

B- This extract of the story means that the dog of this story was like “a dying traveller in search of water” because he was deshidrating, dying and desesperated because it was too hot.

C- He is decribing the horror of the shed and the creepy animal inside it.

D- In this one, he is also describing the odd and weird shed.

E- In the next quote, he is describing the reaction of the faces when the children saw ravi.

F- In the next extract, he describes the disappintment of Ravi.

In today´s class, with Pato, we analysed by writing and explaining the meaning of each stanza and the literary devices.

We made a scrapbook where we analysed it.

In my opinion, some themes of this poem are Love, nature, supernatural, sadness and obviously passion.

Today we started reading WarHorse this is my own vision of Joey. 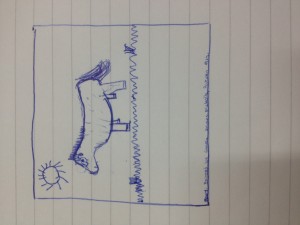 Essay Question: Explore how Blake tackles the theme of love in his poem “The Clod and the Pebble”

William Blake treats the theme of love in this poem showing two totally different points of view about love.

The first point of view he shows is the Clod´s opinion. The Clod explains that love is positive and joy. We can clearly see this when he says: “Love seeketh not itself to please”. Also he is innocent. Blake in the first stanza use hyperbolic language and symbolism when he expresses: “And builds a Heaven in Hell’s despair”. This means that something bad, like hell, can turn totally to their opposite, like heaven. We can see that William Blake uses Hyperbolic language because he uses to express love two extremes, like hell and heaven. Throughout these metaphors we can understand the clod´s thoughts about love.

The second point of view he shows is the Pebble’s view. The Pebble explains that love is negative, evil and suffering. We get to realize that he is experienced and shows individualism. We can see it when he says: “ Love seeketh only self to please”. In the third stanza  he uses hyperbolic language and symbolism as well, when he tells:” And builds a hell in heaven’s despite”. This means, that something very positive and good, like heaven, can change to their main opposite, hell. Throughout this metaphors we can see the pebble’s thoughts about love.

In conclusion William Blake deals with the theme of love giving personification to two objects that show their different opinions about love.

By: Matías Ripoll and Ramiro Aizpiri.

Kathleen Raine was a very affected by her believes and her spiritual sense. William Blake influenced a lot her work and her writing because she admired him. The death of her husband also influenced her writing and made her writings a lot more depressing. She passed her childhood during the First World War and also lived during the second world war and this was hard for her so their works were influenced by this.

Forsook: To abandon or to left something.